Since 2008, Criss Angel has been performing live on stage at the Luxor in Las Vegas. Millions around the world have seen Criss perform his unique brand of magic and illusion. But having a hit Las Vegas show is just the beginning for Criss Angel!

Criss Angel's passion is performing LIVE, not only in Las Vegas, but all across the United States and the world. Criss Angel has started a touring empire that will take you on a magical, mystical journey of the most spectacular illusions ever performed.

Want to learn more about Criss Angel's Las Vegas show? And where will Criss Angel tour NEXT?

Read on, you MINDFREAK...

Criss Angel returns to where it all began with Criss Angel MINDFREAK, a brand new magic show unlike anything the world of entertainment has ever seen! After performing for 10 years in Las Vegas, Criss Angel continues to wow crowds with his magic and illusion, and MINDFREAK promises to be a show like no other on the Vegas (or world) stage! Set to debut in December 2018 at Planet Hollywood Resort and Casino, MINDFREAK will have over 75 illusions, more magic on stage than any other production in the world. Learn all about this brand NEW show HERE and prepared to be blown away!

Criss Angel RAW: The Mindfreak Unplugged is a theatrical experience unlike anything that Criss Angel has ever done to date! Criss Angel #RAW promises to bring Criss Angel's most famous magic - including sleight of hand, mentalism, and more - to the audience an intimate, RAW setting. Some of Criss Angel's talented friends from the A+ rated show The Supernaturalists will also make an appearance! The show toured exclusively in select cities throughout 2018. New dates have been announced in the US & Canada for May, June, and September 2019, in addition to an exclusive run of shows in New York City in July 2019! Don't miss this #MagicEventOfALifetime!

In May 2016, Criss Angel turned the world of magic upside-down by debuting a brand new magic spectacle at the Luxor Hotel and Casino called Criss Angel MINDFREAK® LIVE.

Mindfreak LIVE is unlike any other magic show on earth, and a true #MagicRevolution! The show is 90 minutes of pure wonder and excitement - Criss performs his most famous illusions on an incredible stage using state of the art video and lighting technology. There are live musicians, there are incredible dancers and performers, there are lasers and lights, and there is magic - it is unlike anything you have ever seen before!

Mindfreak LIVE is Criss Angel at his absolute best on stage. You have to SEE IT to BELIEVE IT! 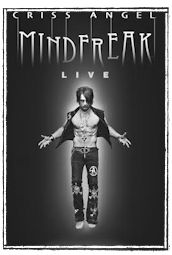 In 2014, Criss started his first touring show called MINDFREAK LIVE. The show is a 90 minute spectacular featuring the most mind-blowing illusions ever performed on stage! Mindfreak Live is the "magic event of a LIFETIME" (Huffington Post) and was given a 5 star review by the Digital Journal.

Did you know? Mindfreak LIVE was originally scheduled to debut in Dubai at the Hamdan Sports Complex on November 12-14, 2014, but the Dubai shows were postponed and the show debuted exclusively at the Foxwoods Resort Casino in Connecticut on November 13-15 2014.

Mindfreak LIVE marks the first time Criss has performed outside of Las Vegas in 6 years.

The Foxwoods shows sold out in record time, and the rest, as the say, is history!

Mindfreak LIVE has had an incredible run with 18 sold out shows from November 2014 to January 2015, with additional sold out dates across the east coast in 2015. #MindfreakLIVE went international in Buenos Aires, Argentina, with sold out shows in August/September 2017! The show returned to Foxwoods in November/December 2017, with new dates announced at the casino resort for June/July 2018.

THE SUPERNATURALISTS
(On Tour) 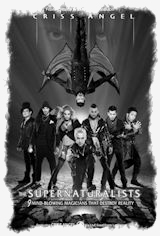 This brand new magic spectacle directed by Criss Angel premiered exclusively at Foxwoods Resort and Casino on June 26, 2015*, and select dates throughout June and July 2015. The show quickly broke ticket sale records and became the most successful ensemble magic show premiere in history (Examiner). The show has toured throughout 2015 and 2016.

Fun fact: This web site was built at the very start of BeLIEve's debut in 2008!

To learn more about the show's history, to see pictures, read reviews, and more, visit the BeLIEve page created especially to highlight this amazing show!